It’s just not fair that a man can be so fresh-faced and pretty. Here is our first look at Song Joong Ki as Kang Maru, a innocent medical student before he gets all hell-bent on revenge for the upcoming drama, Nice Guy.

According to the drama reps, Song Joong Ki will be showing a wide range of acting as he goes from a “good” and hopeful young boy in love to a “bad” homme fatale who uses the love of one woman to get revenge on another. It’s hard to imagine Song Joong Ki’s angelic face as an evil character but I’ve seen what he is capable of in Tree With Deep Roots so I have nothing but high expectations for this boy. I mean, man.

I just want to pinch those cheeks! Nice Guy airs in September after Gaksital. 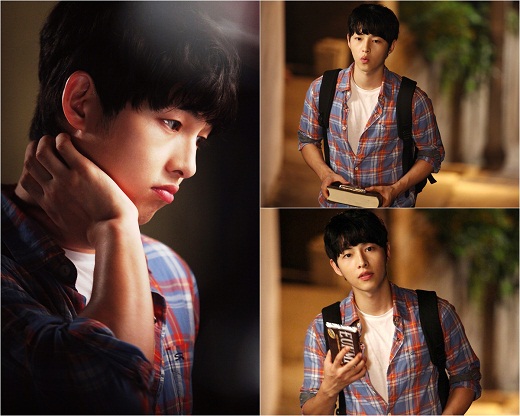 There’s also of photo that’s been circulating online of Song Joong Ki and Moon Geun Young together at Sung Kyun Kwan University. Both are students there and in the photo they are casually standing around in the school hallway talking to each other and other friends. Can you imagine coming home and telling your parents, “Oh, I just had a nice chat with Song Joong Ki and Moon Geun Young today”?

It would be amazing to see these two together in a drama together except because both are so soft looking, I’m not sure they would work as a couple. Maybe brother and sister?