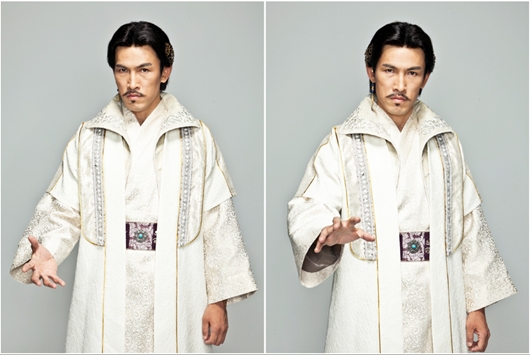 Ki Chul lives to manipulate people and have them worship him. He also can literally freeze people with the touch of his hand. He deliberately sent his sister as a tribute to Yuan and through manipulation, placed her as Queen. Now as the brother of the Queen of Yuan, he has great power and influence in Goryeo. Ki Chul exercises power over people through their greed, ambitions, and feelings. He has never met someone he couldn’t control until…

Jang Bin is the palace doctor who personally looks after the King and Queen of Goryeo. As such, he is the considered the best in the country. As a child, he traveled all over Goryeo with his merchant father. He learned medicine in India. He also learned acupuncture(?) and energy circulation(?) to supplement his medical knowledge. Because of this knowledge, he is able to fight but he does not like to. He knows that if he fights and hurts someone, he is only going to end up having to heal them anyway.

In Jang Bin’s still cut, he is fighting off attackers with a bamboo fan. I guess Jang Bin fights with a bamboo fan instead of sword because he doesn’t want to inflict deep wounds on people. As for the question marks next to acupuncture and energy circulation, this is because I couldn’t find the direct translations nor the correct Hanja for the original Korean terms. Through some brief research, I surmise that Jang Bin’s supplementary skills are like those found in the wuxia genre- you know, when people fight by channeling qi/inner energy into their hands and blowing their enemies away.

Obviously there is going to be a lot of interaction between our modern day medicine woman, Eun-soo, and Jang Bin. I wonder how the writer Song Jin-ah will balance the fantastical element of Jang Bin’s medicine with Eun-soo’s biomedical knowledge. It’s going to be tricky and if done incorrectly,  it will make it hard to find this drama believable.

At the age of twelve, he was sent to Yuan, basically as collateral.  He saw his cousin and uncle become kings of Goryeo, only to be powerlessly chased away soon after. He holds a lot of frustration and anger inside his heart as a result. He does not know how to fight or even ride a horse because he finds those skills worthless for a (potential) king of a powerless country. Then one day, Yuan gives him a bride and makes him king of Goryeo. He is determined to hate his queen but finds that she is not someone to be trifled with.  He meets Choi Young and Eun-Soo on his way back to Goryeo…

Ryu Deok Hwan is receiving a lot of praise from the director and writer of Faith because, despite his young age (being born in 87, same age as Lee Min-ho), he is the channeling the presence needed for the role of king.

Princess No-gook is a fearless and prideful woman. She did not marry King Gongmin as a Yuan princess but as a woman in love. But as he shunned her, her love transformed into hate. Her feelings for King Gongmin are complicated- love, hate, compassion, and anger all exist in her heart. 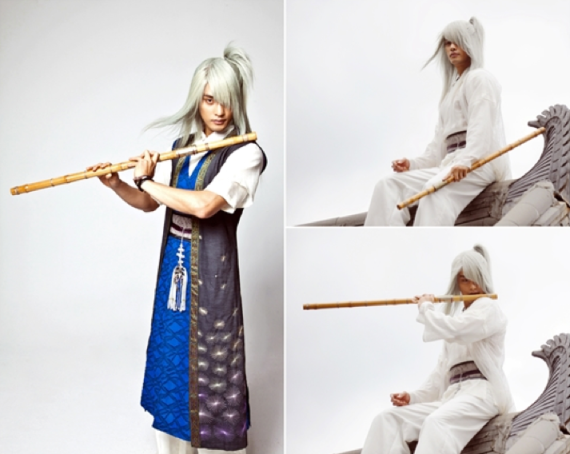 Younger brother of Ki Chul. He can kill people with the sounds of his bamboo flute. The only thing that matters to him are his siblings and his flute. Quite emotionless, he cares more for animals than people, so he finds that it doesn’t really bother him to kill other human beings. Now that’s scary.

Sister to Ki Chul and Cheon Eum Ja. Hwa Soo In can control fire. So the three siblings (Ki Chul, Cheon Eum Ja, and Hwa Soo In) all have some fantastical power. What does our General Choi have??? We’ve seen him channel some kind of energy in teasers but so far there hasn’t been an solid description of him wielding some kind of power. So all we know is that he is a great warrior who likes to sleep. Since he is going against people who are pretty powerful, I hope he has more than a police shield for protection.

Here is a poster-shoot BTS clip with Lee Min-ho talking about his character General Choi. Lee Min-ho says General Choi was a warrior who wanted to leave the palace (in essence, he didn’t care what he did with his life) because of a painful incident in his past (don’t all our heroes have one of these?). But through Eun-soo and King Gongmin, he discovers hope and a new purpose for himself.