“Faith” and Its Flaws 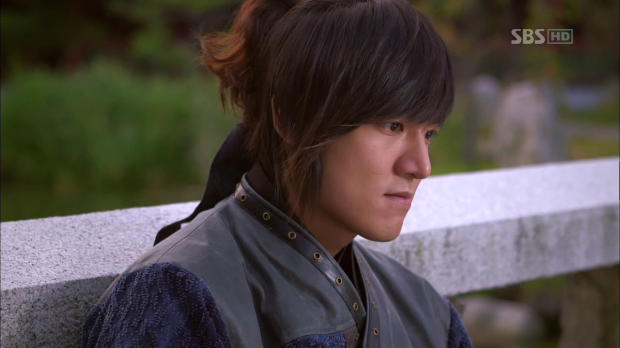 Young is not too happy with me, is he?

People have asked why “Faith” is not a ratings hit in Korea and why there seem to be just as many people who don’t like it as there are people who do. So let me take this space to offer my conjectures and review.

I love “Faith” dearly but it is far from perfect. I have written many times before on the directorial flaws. Perhaps it is due to the choppy editing but the soundtrack tends to start and end abruptly and sometimes, the music choices are not always suitable. The fantasy elements of this drama are sporadic and aren’t incorporated well into the overall story. They seemed to there for the spectacle but the execution isn’t always exciting. The political storyline is overly simplistic and repetitive and while some characters get a lot of attention, many are underdeveloped. The acting in the drama as a whole is uneven with wonderful performances by some actors and mediocre from others.

These flaws become more apparent as we get closer to the end of the drama because the same plot devices keep being used, such as the poisoning of Eun-soo. Eun-soo also just kept too many things to herself, revealing them very late. Her love for Young wasn’t apparent until way past the mid-point. Also, even though we are close to the ending, there is still so much we don’t know about Eun-soo and her story. This leaves so much room for error in the last two episodes, which can bring down the quality of the writing as a whole. What I am fearing most about the last two episodes is Writer Song throwing us balls from left field to quickly wrap up the story and we are left going “Huh? Where the heck did that come from?”

I can see why this drama is not a hit in Korea. This writing and the directing does not succeed in creating a drama that is meant to be watched at a evening primetime on two weekdays over the course of three months by a wide Korean demographic. This drama started off with too many things going on at once- fusion, sageuk, fantasy, love, politics, and romance without being properly integrated. While it showed potential, it wasn’t immediately grabbing because the character arcs and background were strangely placed. I think Director Kim Jong-hak does well when he has a lot of time, such as for “The Legend,”  but his directing suffers when he is working in a live-shooting timetable. Song Ji-na is also writing a story that isn’t easily digestible. With “Faith,” you have to do a lot of mental exercise to get to the heart of the story but most viewers don’t have the time or energy to do that. I’m not calling most viewers dumb or lazy. I’m arguing that Song Ji-na failed to find that perfect balance of writing a story that the masses can consume right from the beginning without first caring about the characters. We have to work a lot to understand and love these characters because so many things are left unexplained. A writer shouldn’t need to have her characters explain their thoughts and actions all the time, or have to lay out every single context and personal history, but there is just too much untold and unexplained for the vast majority of viewers. All these holes leaves room for viewers to complain, to get nitpicky, and to drop the drama. I think this story would have done better in novel format rather than the drama format, actually.

Not every part of this drama is good but the parts that are, man-oh-man do I love them. I know some people complained about Young and Gongmin’s relationship and how they seem to revisit the issue of trust and loyalty over and over but I actually love it because I don’t think trust and loyalty are built over one dramatic episode but continuously through various challenges. The best part of the drama for me is the character development and relationships between Gongmin, Noguk, Eun-soo, and Young. The growth and connection between the four main characters are detailed and gradual (and I have written numerous posts on this), but of course that means the average Korean viewer is not going to have enough interest or time to do the mental work to see it. Thankfully I was recapping it and interested enough from the beginning to take the time to ponder and fall in love. And I fell in love hard.

Yay! Young’s smiling at me again!