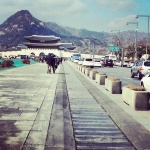 South Korea’s bragging point has always been the coexistence of modernity with its traditional culture. There are always quotes from tourists on websites and brochures who marvel at the existence of royal palaces right in the middle of the  cosmopolitan city of Seoul, and the continued practice of traditional rituals and customs in a rapidly modernized and globalized society.

During my childhood trips to Korea, I never considered the dichotomous relationship of the gasoline-powered cars running past the stone walls of a Joseon dynasty palace. It wasn’t strange; it wasn’t peculiar or unique. It just was. As I grew older and saw more of the world, with my well-traveled eyes, I was actually saddened by how little of history was left in Korea. Compared to the Kyoto palace, the Forbidden City of China, and the great cathedrals of Europe, the palaces of Korea looked shabby, unkempt, and artificial. I mourned the loss of South Korean history and its artifacts to wars, colonialization, and the country’s unchecked desire to have a place among the world’s most modernized, capitalistic countries. However, because of two dramas in the past year, instead of loss, I saw the endurance and survival of history, the miraculousness of time and human development.

When I first arrived in Korea, I had the chance to visit and explore the landmark locations featured in 2012’s “Queen In Hyun’s Man” and “Faith”: Gyeongbokgung and Gwanghwamun Square from “QIHM,” and Bongeunsa and COEX from “Faith.

Gyeongbokgung, the main palace of the Joseon Dynasty, was the palace that Boong-do first time-traveled from into the future to meet Hee-jin. I have been to that palace many times before, and by the most recent time I went before coming to Korea this year, I was bored of the palace. But thanks to “QIHM,” I have a newfound appreciation of the landmark, as well its history. Built in 1395 and destroyed many times and rebuilt, the structure still stands in the middle of Seoul, a witness to history.

I entered Gyeongbokgung through its main entrance, Gwanghwamun, but instead of walking forward into the main buildings, I turned back and looked toward Gwanghwamun square. 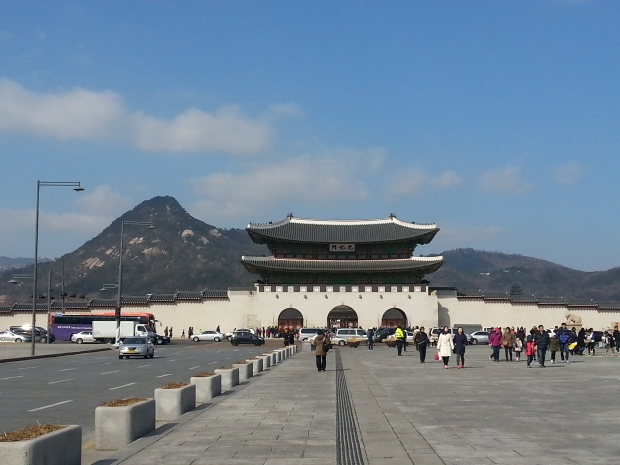 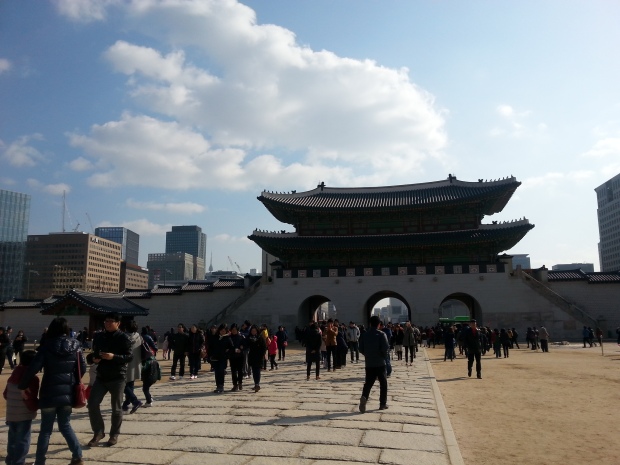 Inside Gyeongbokgung, look out toward Gwanghwamun. 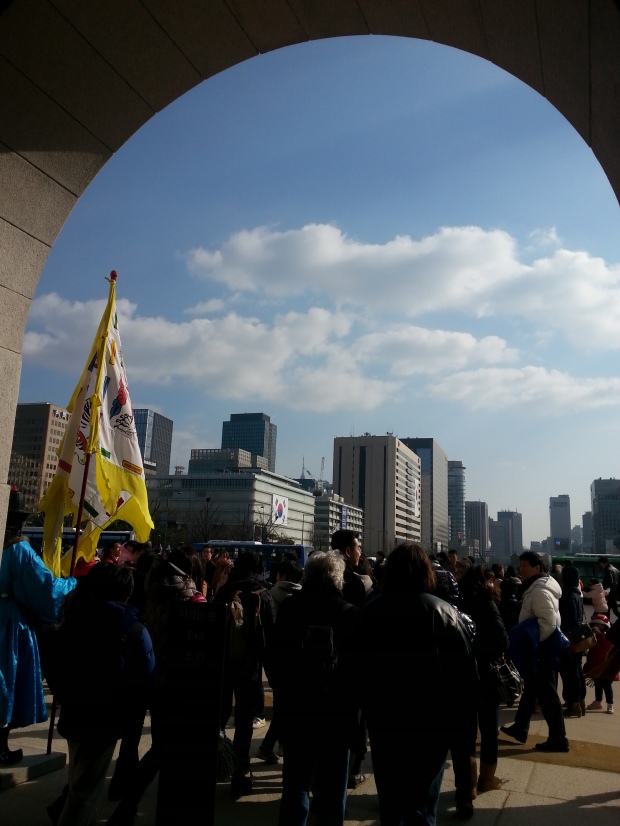 Under the Gwanghwamun archway, looking out at the square. 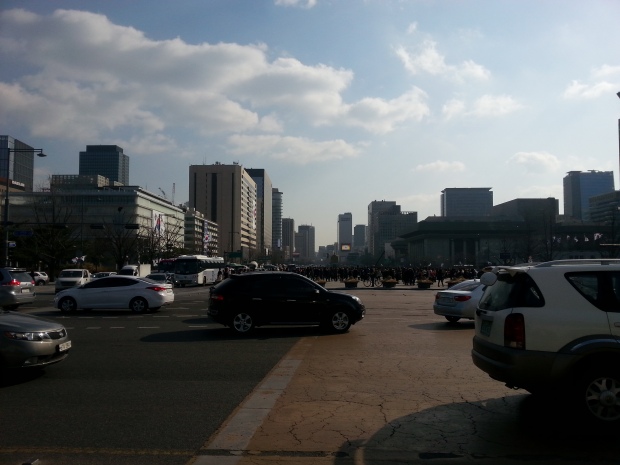 Looking out toward Gwanghwamun square from Gyeongbokgung, right in front of the entrance.

I saw the city of Seoul through Boong-do’s eyes. How strange, how utterly unbelievable! The tall buildings, the cars speeding by! Structures so unlike the ones he was used to, being built out of iron, concrete, and glass. The height! Yet, when he and I look back, the palace is still there, standing as it used to 300 years ago.

I walked along the “Memorial Walkway” built in 2009(?), to commemorate the history of the Joseon Dynasty. It is the same walkway that Boong-do visited, when he returned to Hee-jin even after the talisman was cut in half. It was where he saw the history of Joseon laid out before him, giving him knowledge of all things to come, making him reflect on a life worth living when you knew all. I sought out the time plaque that Boong-do stared at, the stone etched with Queen In Hyun’s return to the palace. 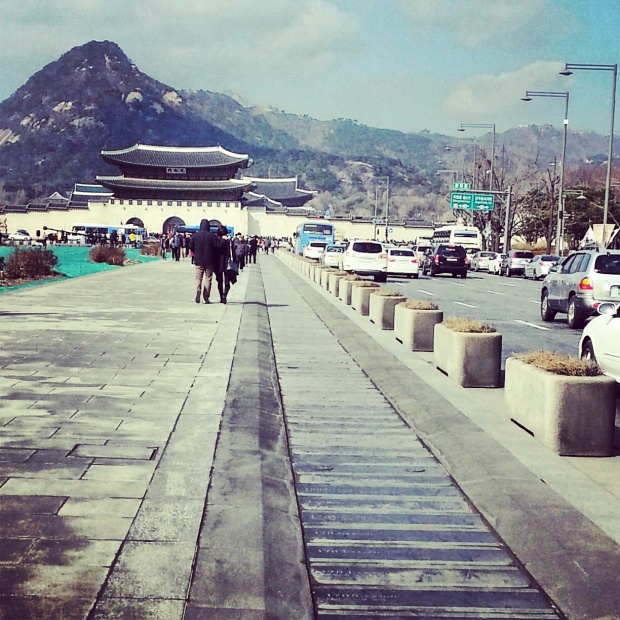 Memorial Walkway at Gwanghwamun square, leading up to Gyeongbokgung. 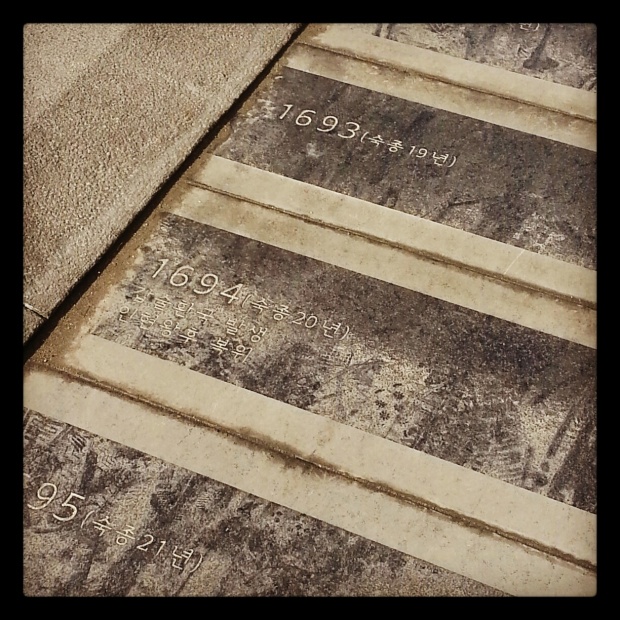 Queen In Hyun is brought back to the palace in 1694. 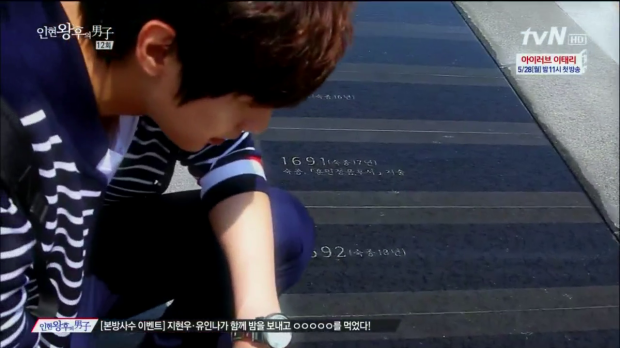 On another day, I visited Bongeunsa and COEX, featured in “Faith.” Bongeunsa is the Buddhist temple where the “heaven’s door” is located, and COEX is the convention hall right in front of Bongeunsa, where Eun-soo had her plastic surgery convention. 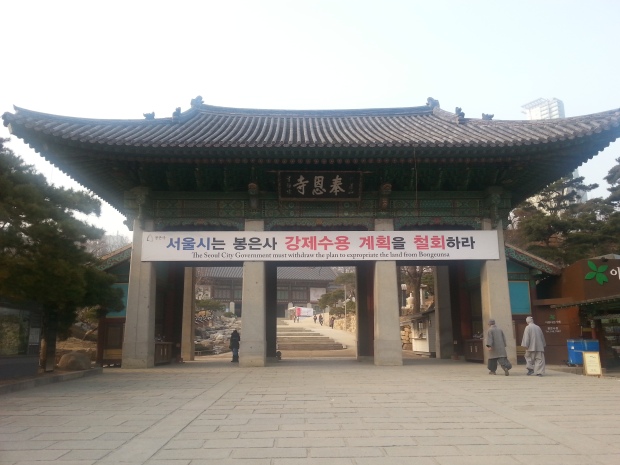 Entrance to Bongeunsa, pictured from the street looking in. 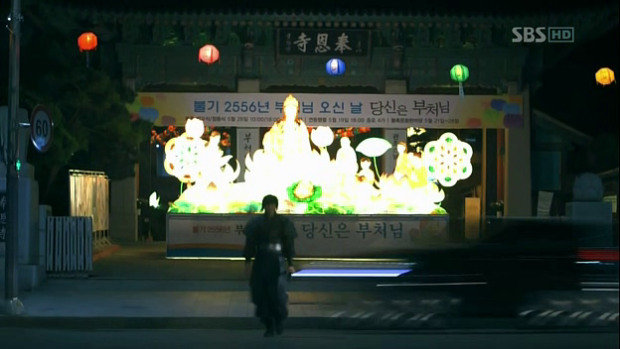 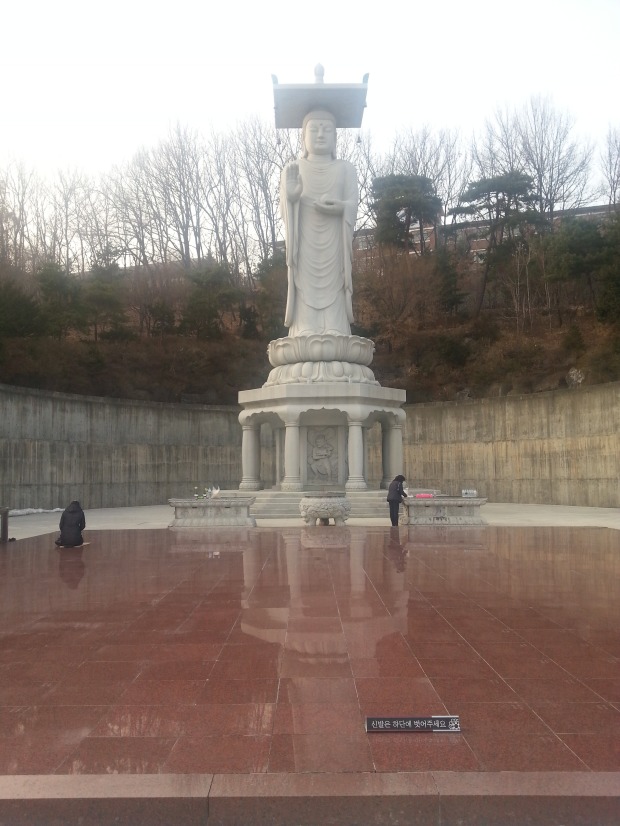 Mireuk Daebul (Great Statue of Maitreya Buddha), where the “heaven’s door” was. 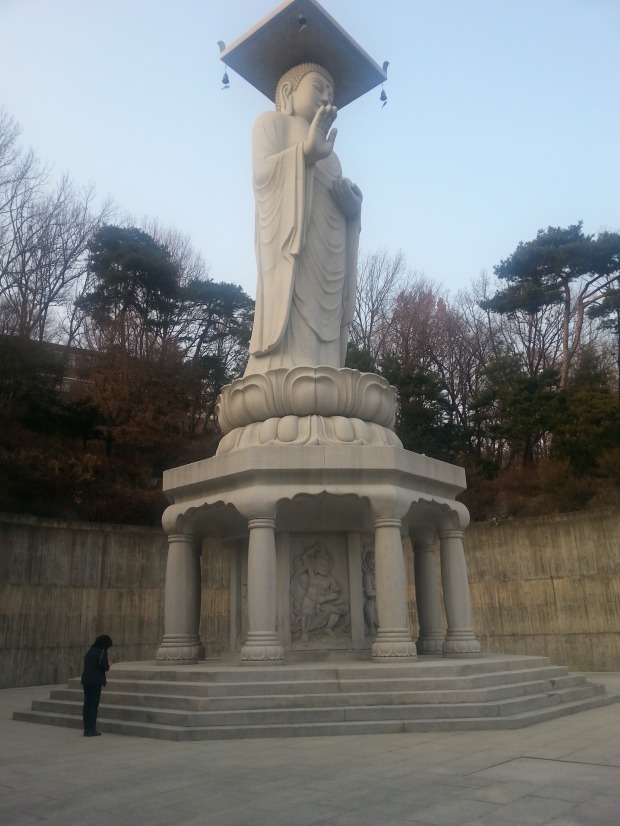 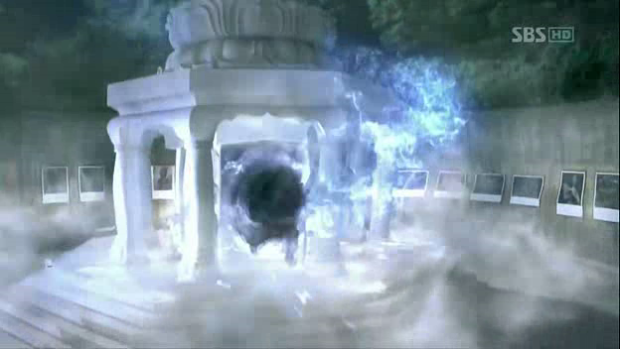 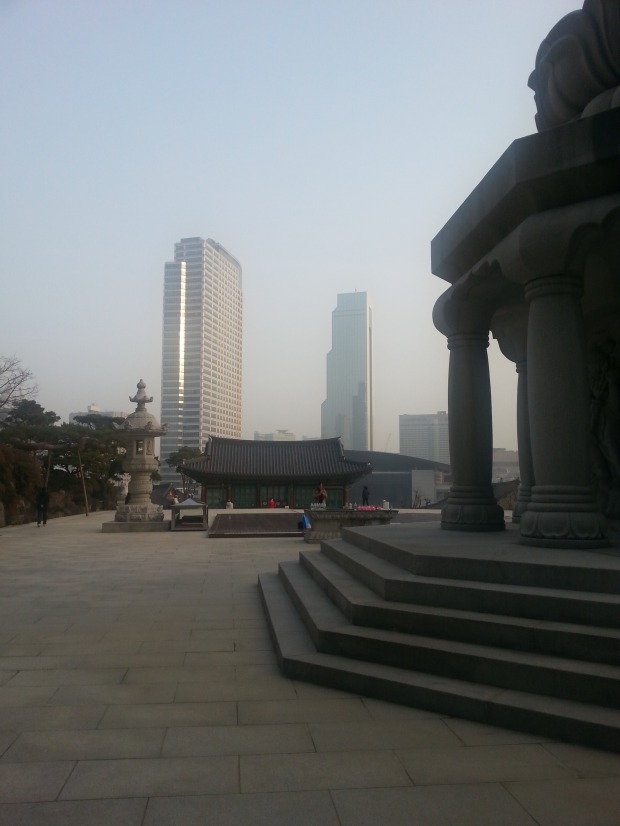 The skyline of Gangnam that Young must have seen as he stepped out of the time portal. 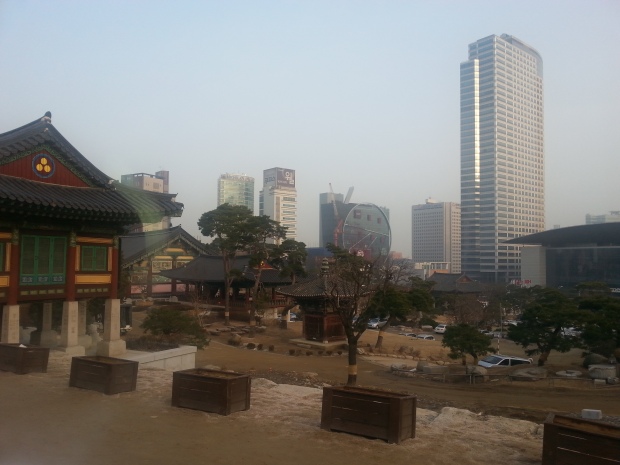 Another view of the Gangnam skyline from inside the temple. 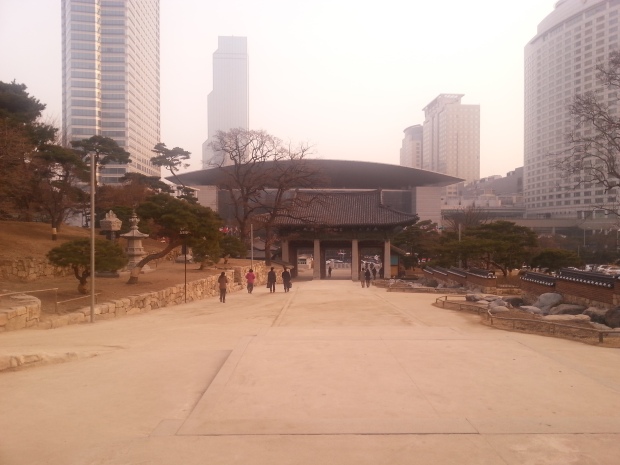 Leaving the temple toward COEX. 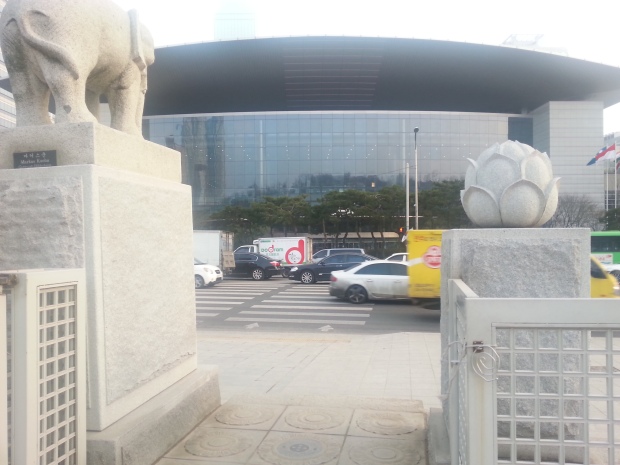 Exiting Bongeunsa, facing right at COEX. The street Young crossed to get to COEX. 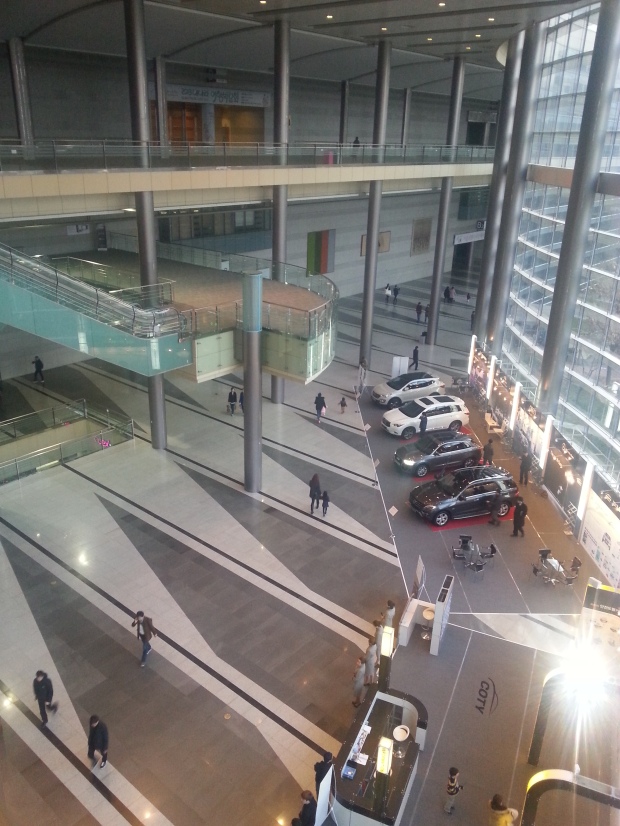 Looking down into the  COEX lobby from the second floor. 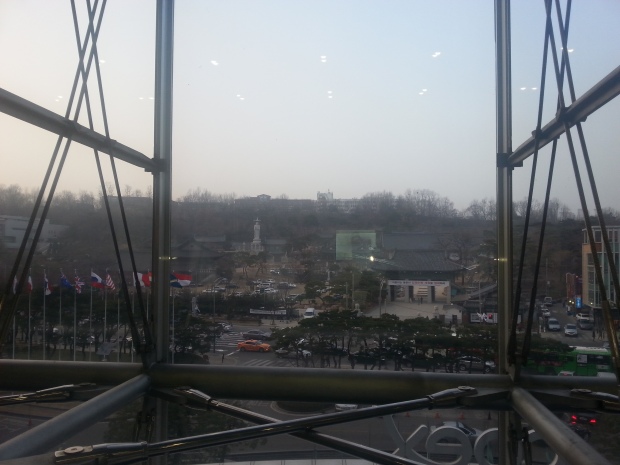 View from inside the second floor of COEX looking at Bongeunsa across the street.

How daunting and strange it must have been for Choi Young, to step out into 2012 from 1351! Walking across seven-hundred years in an instant. The only explanation must have been for him was that he was in heaven; how else can you explain all the night sky almost as bright as the afternoon, the horseless carriages, and structures that tower stories above?

While I can’t actually travel through time, I was able to feel the passage of time and the power of history through my walks at the landmarks. It gave me a newfound appreciation of Seoul and how structures hundreds of years old stood next to buildings only a decade old. Seoul is not a beautiful city, but it is certainly fascinating.